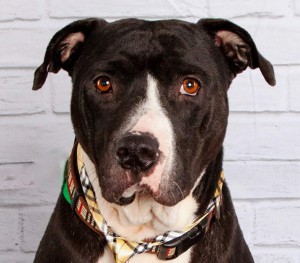 Riley is an approximately 3-year old male Pit Bull mix and weighs around 60 lbs. He was rescued after being attacked by wild dogs at an Indian reservation. He had several wounds which are slowly healing! He was also positive for heartworms but has been treated and given a clean bill of health!

Riley is so sweet and loving! He is a favorite with his kennel tech at the vet, who spends lots of time with him and loves to put funny hats on him! He is a great sport! He hasn’t been around children, but he is so gentle and loving, he should be great with them.

Riley could definitely be your best friend. He loves all humans that he meets! He does like other dogs but because he is a little intimated by other dogs, he just needs a slow introduction. He LOVES his toys at boarding and would love a home where he would get lots of attention and included in activities!